The thirty-ninth annual Blues Music Awards honoring blues musicians and recordings in 26 categories were held in Memphis, TN, last month. Portland’s own Curtis Salgado was once again awarded the BMA for Soul Vocalist, his ninth BMA award and seventeenth nomination overall. Other local musicians nominated this year were Karen Lovely, Jimi Bott, and The Paul deLay Band. Congratualtions to Curtis and to all the award recipients and nominees.

The night’s biggest winners were Taj Mahal & Keb’ Mo’ for individual awards and for their outstanding collaborative album TajMo, for a total of five awards. Among those Taj Mahal was presented with the prize award of the night, the BB King Entertainer of the Year. Rick Estrin also BMAs took home three himself, including with his band The Nightcats. 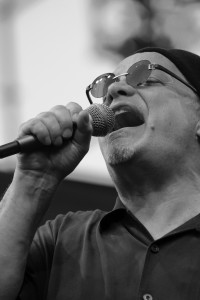